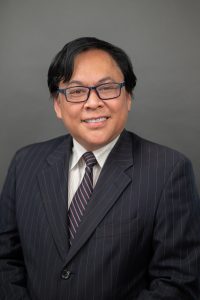 Larry L. Doan is an immigrant from Vietnam who fled the communist regime at the time and came to the United States at the age of 10.  He grew up in California as a self-described “math and science nerd.”  After becoming an engineer, Larry worked in the defense industry for a time but did not feel it was fulfilling.  He became a lawyer instead, and discovered that practicing immigration law was much more rewarding because he could draw from his own experience to help and impact so many immigrants’ lives in a positive way.

In his free time, Larry enjoys spending time with his partner and their seven-year old son as well as hiking, biking, spending time at the beach, and will be exploring all the wonderful parks and natures that Florida has to offer.

Education
Larry holds a Bachelor of Science degree from the California Institute of Technology (CalTech) and a J.D. degree from Southwestern University School of Law in Los Angeles, with honors.

Experience with the Center for U.S. Immigration Services (CFUIS)
Larry joined CFUIS in June 2022 working out of its Orlando office.

Previous law experience
Prior to joining CFUIS, Larry practiced at his own law firm, the Law Offices of Larry L. Doan, GuruImmigration, for over 20 years where he specialized in removal defense, family-based immigration, and employment immigration, especially in the area of H-1B, TN, R-1 and E-1/E-2 visas.

We hope that you are well. Your safety and well-being are of paramount concern to us. To keep our clients and our sfaff healthy, we are performing the following activities: